Jumbo has been developing pioneering solutions for ocean transportation for more than 50 years. Since 2003, building on our heavy lift capability, Jumbo rapidly established a sound track record in the offshore subsea installation market.

It is our philosophy that engineering, safety awareness and environmental care stand at the forefront of a reliable operation. This is why Jumbo has invested – and continues to invest – in the latest state of the art engineering methods, software and equipment and has developed its in house safety awareness program “Stay Well”.

Today we operate a versatile and in-house designed heavy lift vessels with a lifting capacity from 800t up to 3,000t. Two of our J-1800 class Construction Support vessels, Jumbo’s Fairplayer and Jumbo Javelin, are equipped with a DP2 system, enabling them to provide transport in combination with offshore installation services.

Our success has been built on strong client relationships. As partners we strive to assist our clients in reaching their goals.

Back in the late 1950’s when the container and the pallet were the most remarkable innovations in ocean transportation, Jumbo’s founding father had a more insightful vision. He developed a concept to handle those pieces which did not fit into a container or on a pallet.

Until that time, heavy lift cargo was carried using whatever equipment was available – and often as an afterthought. Jumbo’s founder had an idea for something better. He saw the opportunity to address a virtually untapped and emerging market and this vision led him to focus on the needs of the heavy lift transport industry.

The first mv Stellaprima was the result. The Stellaprima, and its four, 12-ton derricks, was a remarkable innovation for her time. From that moment on, in 1968, Jumbo became a pioneer in the heavy lift shipping industry.

Jumbo was founded on this desire to sail against the stream of current trends and find a better course. That same, forward-thinking, future focus was in place throughout the growth of the company. Every few years, a new class of better, stronger, safer and more efficient vessels were added to Jumbo’s fleet. Technological developments in each class ranged from evolutionary necessities to revolutionary advancements and, during this time, Jumbo engineers have invented numerous heavy lift features, which today have become industry standards.

Beginning with the original A-class through to Jumbo’s current flagship, the J-class, with a lift capacity of up to 1,800 tons, Jumbo remains true to its founding principles: Success comes from looking beyond the needs of today, into the possibilities of tomorrow.

Engineering and safety awareness stand at the forefront of a reliable operation. This is why Jumbo has invested – and continues to invest – in the latest state of the art engineering methods, software and equipment.

Jumbo’s engineering expertise is unrivalled in the heavy lift industry and our in-house knowledge makes it possible to take on the most challenging jobs.

Our engineers come from a diverse range of disciplines including mechanical, offshore and civil engineering, as well as shipbuilding and we employ specialists in ship motions and hydrodynamics. This base enables us to work together with our customers to reach optimum practical solutions.

With Heavy lift shipping there is need for unique and careful planning, down to the smallest detail. This is vital for the success of the job. To make sure the cargo is transported safely and efficiently Jumbo carries out a great deal of detailed preparetory work. Our specialists use the most advanced software, such as 2D and 3D AutoCAD systems, Orcaflex and Safetrans and are equipped to make finite element calculations and structural and ship motion analyses. On request we can prepare 3D animations to visualise the stowage and lifting operations. 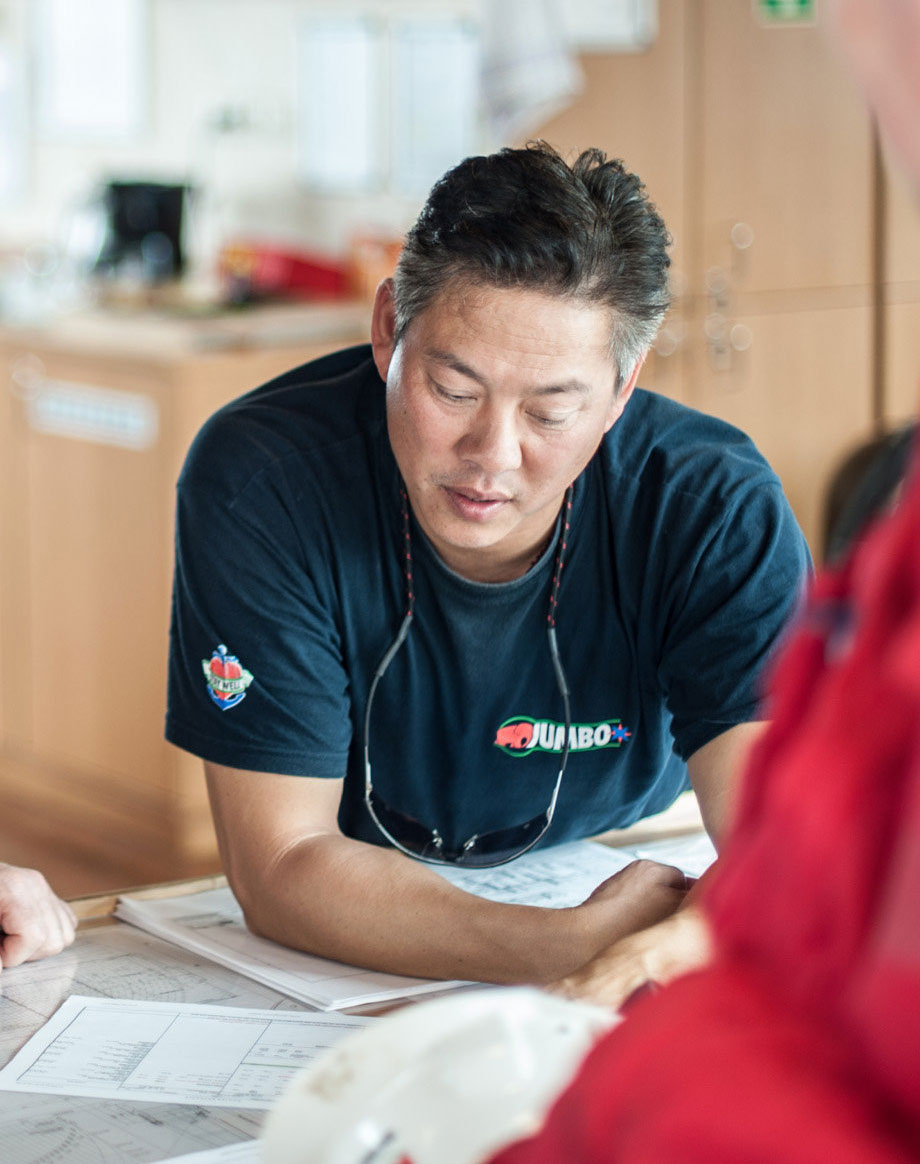 Jumbo makes every effort to offer the best service to its customers, a service which is reliable, safe and cost effective. To achieve this, we are constantly working to improve our own performance. Therefore in 2011, we started the Jumbo Innovation Program. This program has two major aims; to develop innovative transport and installation solutions and to continuously advance Jumbo’s reliability, safety and cost effectiveness.

The starting point of any innovation is a good idea, followed by a solid process to bring it to reality. Hence, the Innovation Program is executed by a dedicated R&D team that continuously gathers and evaluates ideas. The most promising ideas are then put forward as possible applications. A company-wide involvement in this process and (if applicable) client participation leads to the unveiling of innovations.

With its historical roots and strong connection to operational reality the Jumbo Innovation Program will ensure that we continue to provide optimal added value to our clients.